One Vet’s Story: 193 Days in Combat Across Europe

Ray Kratzke, now a resident of Riverfront Manor in Pelican Rapids, Minn., was just 20 years old when he opened a letter in the mail that said he was being drafted in to the US Army. “I didn’t think much of it. They were all being drafted,” said Ray. 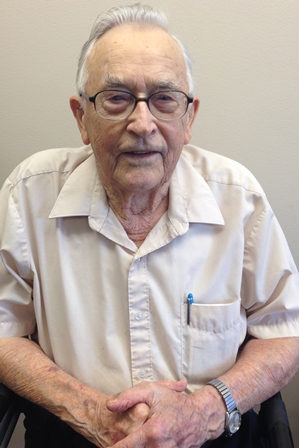 The son of German immigrants, Ray had been working as a farm hand since completing the 8th grade. He figured he’d visit Germany in his life — but not this way. By the time he was 21, he had been to a few bases around the country: Fort Snelling, one in Oregon, then Colorado. Before he knew it, he had been assigned to a tank company in the 104th Infantry Division. His mission: Help fight the war in Europe, right behind the D-Day invasion.

Ray boarded a ship in New York, headed for France. “It was double loaded, so you had twice as many people on there as you had space for,” he recalled. “Sometimes you slept in a bed, other times on deck or in a life boat.” After about seven days at sea, they arrived at their destination, Utah Beach.

The Normandy landings happened on June 6, 1944. Ray arrived just a day or two after the first troops hit the beach. He and his fellow soldiers took landing barges to shore. “There was a lot destroyed. We walked a long ways through small towns. We eventually made it to a house where we waited until we could get more supplies,” said Ray.

As they were waiting, Ray had his first brush with the tragedies of war. “The commander wanted us to go check out a pill box that the Germans had been in. I was left in charge while he and some other men went to check it out,” said Ray. “The next thing you knew, the whole thing blew up. There was a big white streak of fire. Ten men were lost. They took me over there to help identify the bodies. Someone said one man was running down the road on fire so we had to walk down the road to try to find him. We figure the thing was booby trapped or something. It was just all blown up. The walls were six feet of solid concrete and it was just nothing,” recalled Ray.

As he and his unit moved forward, their job was to follow the Army. As they took towns, Ray and his unit would set up in the newly acquired area and be on the lookout for tanks. “The Germans thought they had good tanks, but they didn’t. We were good at our jobs,” he said.

From France, they moved on to Holland. “When we moved in to Holland, we had to cross the Mark River. The bridge was made of boats tied together. Once you started, you couldn’t turn back, you had to face whatever was in front of you,” said Ray. “We thought the army had taken over this town so we went in. As we’re crossing the bridge, bullets began to fly.

The Germans had re-taken the town. We got across the river and went down in to a ditch, covered by a dike so they couldn’t see us,” Ray remembered. As he was trying to position his gun on top of the dike, he had a close call with death. “Bullets were flying overhead and a few whizzed right by me, it missed me by inches,” he said. “A guy thought I had been hit.”

As they pressed on deeper in to Europe, Ray faced another close call. “Our gun had frozen to the ground, it was so cold. We were trying to pry the gun off the ground and a shell landed behind me. A piece of frozen dirt hit me and knocked me down,” he said. He was taken to a nearby house for medical attention. “I didn’t want to leave. I had the best job in the group. I didn’t want to give that up.”

So back in to battle he went. Along with close calls, there were other challenges to being in combat for so long. “I remember when we first went in to combat and were digging foxholes. We went 30 days without taking a shower,” he said. “We didn’t even take our boots off.”

His unit came across a newly liberated concentration camp, Nordhausen. “I stayed behind by the truck but some men went to go check it out. There were just piles of dead bodies, just a terrible thing,” he recalled.

Staff Sgt. Kratzke took great pride in his role and doing whatever he could to get the job done. He recalls how his unit took down one of the most feared German tanks.

“We knew the Germans were coming. I chose a spot between a knoll and a pond and a big bank. When they came through the field, they were shooting and we lost a lot of equipment. But when they came around the bend, we got them with one shot. The tank rolled to a halt and you could hear the shells inside the tank exploding,” said Ray. “But one of the tanks did escape us so the commander made us go after it. We followed the tank for two days and when we caught up to it, it was abandoned. We found the men sleeping in a house so we took them out of bed and took them prisoner,” he said.

Ray and his unit made it to just outside of Berlin when the Germans began to surrender. “The Russians were taking Berlin at the time. There was prisoner after prisoner surrendering, as far as the eye could see,” said Ray.

While the US troops and Russians didn’t mingle much, one night the two found a common bond over an instrument Ray knows well: the accordion. “I was sitting on a truck playing it and the Russians came over and asked me to play on their side of the river. So, I took two heavily armed men with and I played for them. They were singing and dancing. They sang their national anthem and we sang God Bless America,” said Ray.

Recounting his experience, Ray can’t help but think of his younger brother, just 19 years old, who was killed during the war. “I actually thought I saw him. We were walking through a field and there were bodies everywhere. We couldn’t stop, and I didn’t know where he was or if he was even around here, so I kept going,” said Ray. “Thirty days later I got a letter that he had been killed.”

Ray, who spent 193 days in combat, also remembers the sacrifices our troops, then and now, have given for our country. He remains proud of his service to his country. After returning to the US, Ray was honorably discharged from the Army and returned to a more quiet life in Pelican Rapids. Thank you, Ray, for your service. We salute you and all you do!