Kelly and Shelby: A Transcendent Friendship at Ecumen Pathstone Living

He is the guy who sits in the café eating whole tomatoes like apples.  She works the counter there.

The first time she met him when he came to buy his tomatoes, she says he was really grumpy.  Still, there was just something about him that drew her to connect.  So the next time he scooted by in his wheelchair, she flashed her biggest smile and said hello. 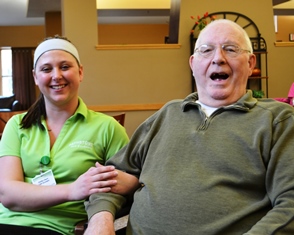 There was something about her that drew him back.  It was like friendship at first sight.

Shelby Dwyer, 22, works at Ecumen Pathstone Living in the lobby café and goes to college at Minnesota State University in Mankato, studying social work.  Kelly Hester, 81, has been a Pathstone resident for the past 11 years.

Despite the almost 60 years difference in their ages, they are kindred spirits with a connection that neither can quite explain.

“We just ‘get’ each other,” Shelby says, and Kelly smiles and nods enthusiastically.

Speaking is difficult for Kelly, but his beaming face shows exactly how he feels.

The staff at Pathstone marvel at the relationship, glowing as they talk about it.  The friendship has been blossoming over the past two years.  Kelly comes by the café every day, and if Shelby is not there, he’s noticeably disappointed.

The staff does not know much about Kelly’s past. Shelby doesn’t either, for that matter. Kelly has a photo album that gives some biographical detail.  But he no longer has family locally.

Kelly was a crew member on Navy fighter jets.  Later he was a financial adviser living in the south metro area of the Twin Cities with his wife. They had no children together. When Kelly’s wife got sick, she became a resident at Pathstone, where she died.  Kelly moved in a couple of years later after having serious medical problems.

Shelby teases Kelly about some of the photos, like when he and his wife dressed up for Halloween as vampires.  She says it fits.  “He’s a jokester. He has a very happy personality.”

They take frequent walks. Shelby pushes Kelly in his wheelchair across the street to Sibley Park.  In the summer, they feed the pigs at the petting zoo or feed the fish.

“We talk for hours,” Shelby says.  “We talk about sports, the weather and tomatoes.  He loves tomatoes. He’s funny and gives me good advice.”

They have lunch every Wednesday.  Kelly loves the tacos in a bag.  On Easter, they had brunch together.

“He makes my day a little brighter,” Shelby says.

“You make my day brighter, too,” Kelly replies.