A Walk Through Time with Dr. John Sanford and Dr. Julie Moller at Ecumen Lakeshore 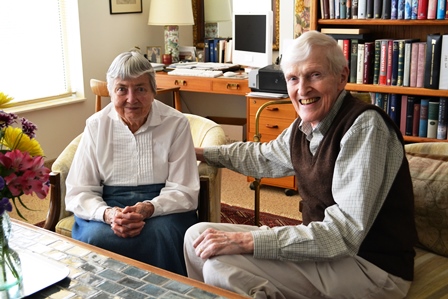 Today, like every day, Doctors Sanford and Moller are making their rounds at Ecumen Lakeshore in Duluth.  It’s been a few years since they practiced medicine, but their regular walks through the rehabilitation unit and around the campus are a reassuring ritual.

John Sanford, a retired surgeon, and Julie Moller, a retired internal medicine physician, are now residents of Ecumen Lakeshore.  They have been married for 60 years and practiced for most of their careers at the same Duluth clinic, where Julie was the first female physician.  (“Somebody had to be first,” Julie quips.)

On their walks, former patients will often recognize them and delight in reconnecting. “It’s wonderful to run into former patients,” John says.  “It’s very rewarding.” 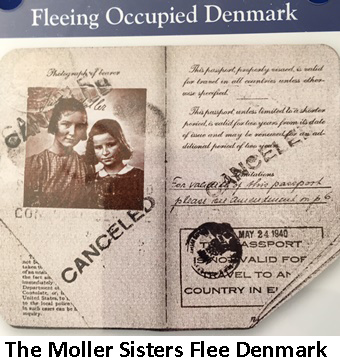 Julie and John had hugely successful careers and raised four highly accomplished children.  But what now looks like a storybook life started against the menacing backdrop of World War II.

Julie fled the Nazi invasion of Denmark in 1940 when she was only 13, coming to the United States on a ship with her sister. Her parents were in the United States when the invasion happened, and the two young girls had to flee on their own. As John puts it: “She was fleeing the Nazis while I was a spoiled brat in the eighth grade in South Minneapolis.”

But John would soon get his own dose of danger. The war was accelerating everything, he recalls, and by the time he was 21, he had graduated from medical school at the University of Minnesota and started doing his internship in Duluth at St. Mary’s Hospital.  He moved through school so fast, he never got a high school diploma.  (“He got away with it,” says Julie.)

In 1950, after his internship, John started working at the Duluth Clinic where he began training as a surgeon and soon enlisted in the Army.  He was not yet a fully trained surgeon but the Army gave him a surgical rating and sent him to Korea in 1952.

He was assigned to the 8063 Mobile Army Surgical Hospital (MASH), where his first job was receiving and resuscitating wounded soldiers.  His gaze wanders back through time and his voice softens and cracks.  “They were the best kids in the world, all shot to hell.”

When he came back from the war, he was asked to speak to the medical society in Duluth about his MASH experience and what it was like to do surgery under battlefield conditions.  “The experience was so gripping,” John says, “and I remember getting pretty worked up in that talk.” When he finished, doctors from the Duluth Clinic offered him a job on the spot — as soon as he finished his surgical training.  For that, he headed to the University of Illinois in Chicago.

Meanwhile, Julie was living in Richmond, Virginia, attending the University of Richmond, where she would go to medical school with top honors — Phi Beta Kappa and Alpha Omega Alpha.

After medical school, Julie came to Chicago to do her internship — and, as it turned out, to meet John. Their first date was at a Chicago Symphony concert, and they dated several months until Julie finished her internship and headed back to Richmond in June of 1954.  In September, John hightailed it to Richmond with a marriage proposal.  Julie accepted and came back to Chicago, where they were married in 1955.

They came to Duluth in 1957 and both started working in the Duluth Clinic.  They talk about how special it was to work together with a small group of physicians who were like family, while they raised their four kids.

The wars were way behind them.  But in 1991, John got an invitation to a reunion of his MASH unit.  A recently retired Cleveland Clinic surgeon who had served with John in Korea decided to organize a gathering at his home in Florida.  It was 39 years later when 26 surgeons, most of them retired, came from all over the country to see one another for the first time since the Korean War.  For two days, they shared stories and talked about old times.

On the third night, the host said he would like to start dinner with a prayer for the wounded and soon-to-be wounded soldiers in the first Gulf War, which was going on at that time. We know there are going to be casualties, he said to the gathered surgeons, and somebody there will be doing our work. We know what that’s like, and they need our prayers. 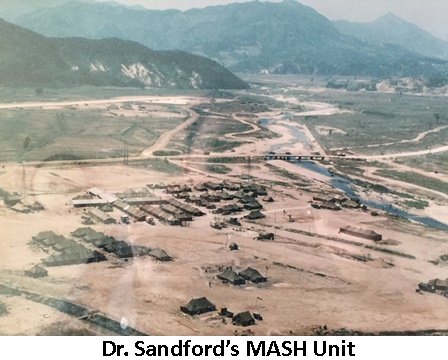 “It’s unforgettable. It shows what effect the war had on us.  We had never really gotten over it. We just suppressed it all those years.  I guess we finally had closure, if that’s the right word. Back then we had been young doctors full of zip, but we had never gotten over it.

“I’m sure the same thing is happening with all the present wars.  You’re taking care of all these wonderful kids.  It’s emotional — but not while you’re doing it.”

Julie and John have mementos of those war years — pictures of John’s MASH unit and Julie’s passport when she was fleeing occupied Denmark.  But those memories are overshadowed by their happy years practicing medicine in Duluth, raising their family and becoming pillars of the community.  During that time they took their kids to Denmark to visit Julie’s parents during the summers — an outcome Julie could never have imagined in 1940.

They have been living at Ecumen Lakeshore for three years now, making their daily rounds like clockwork.  They came here after John had hip surgery.  The surgery itself went fine, but he got an infection that is still being treated.  Neither he nor Julie drive, but they walk every day.

“It’s a different life — not being able to drive,” John says. “But we have such wonderful kids who take care of us.  And you have no idea of the care we get here [at Ecumen Lakeshore].  It is just remarkable.”

“I just can’t imagine a better, happier life,” John says. “We are so blessed.”