When Vickie Thompson attended her first meeting of the Pelican Valley Health Center Hospital District Board of Directors in August,1993, it seemed hard to believe that she’d still be going at it a little over 300 meetings later. 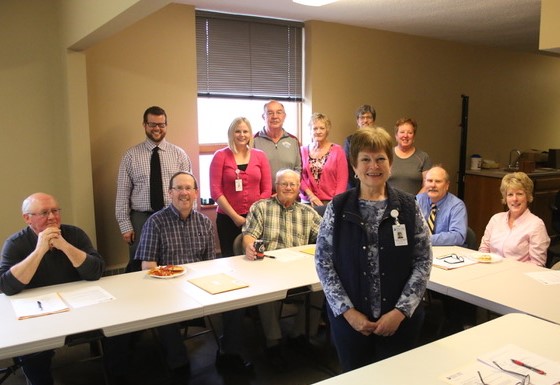 In those early years, Vickie witnessed some of the pivotal moments in the 66-year history of the Pelican Valley Health Center (now called Pelican Valley Senior Living).  But as the monthly Board of Director’s meeting was adjourned on May 22, 2017, another historical Pelican Valley event occurred: Vickie Thompson closed out her final board meeting.

Vickie is planning to retire in mid-June, ending a nearly 40 year career at Pelican Valley. The May board meeting was her final meeting before her retirement. The bittersweet meeting was celebrated with a few of Vickie’s favorite things. A fan of Costco, the board brought in Costco pizza, a Costco cake and her favorite pop, Coke Zero.  (A formal retirement party for Vickie will be held at the Pelican Valley Care Center in mid- June.)

Vickie began taking the minutes after accepting a position as an administrative assistant. She took over taking minutes for another long-term Pelican Valley employee, former Director of Nursing Maria Stokka. While Vickie took over the minutes in 1993, she had actually been a Pelican Valley employee for many years already. Her first stint with the facility was from 1970 to 1978. After taking a few years off to raise her family, she returned in 1987, making her cumulative total years of service 38.

Since she began playing an active role with the Board of Directors, Vickie has helped work through a number of large issues and changes. “The things the board has had to deal with has changed over the years,” she said. “At one point it was physician recruitment challenges – then the clinic losses and closing the hospital. Now we’re focusing on senior services.”

The board has been tasked with making tough decisions during her time as well, including closing the hospital and emergency room in the early 1990s. “That was such a gut-wrenching decision, but it was the right thing to do,” Vickie said. “It helped us be sustainable and be able to do the things we’re doing today.”

But there was one thing that Vickie was surprised to see during her time serving the board – the acquisition of the Good Samaritan building. “I never would have thought that one day that building would be part of our campus,” she said. “Many years ago we looked at buying the building, and it wasn’t going to happen. Now, we have it as part of our community today.”

One of the more difficult things to work through was the hospital district detachment hearings a few years ago. “The board and all of us are so invested in what we do and so supportive of advancing our mission, it was hard not to take that personally,” she said. “At the end of the day, we just want to do what’s best for the residents, our staff and the community.”

But what has been the best thing she’s seen while being an unofficial member of the board? “That’s easy – finally finishing the building project,” she said. “It was such a long road and so needed.  It’s great to see it get done.”

As she closes out this chapter of her life and moves forward to retirement, Vickie knows the board will continue to be successful and carry out the mission of Pelican Valley. “They’ve always been such a good group to work with,” she said. “They’re very vested and interested in to what happens to Pelican Valley and committed to doing what’s best for our campus and the greater community.”

Filling Vickie’s place won’t be as easy. Our meetings will be really different without her there. She is the expert in all things Pelican Valley and such an all- around great person. Whether she sees it or not, she has really helped shape the board and played such a huge role in its success and helping advocate for keeping Pelican Valley such an important part of this community. She will be greatly missed.