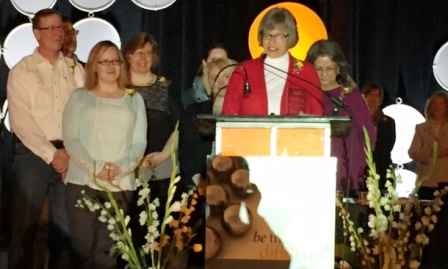 For almost two years, starting in the fall of 2013 and ending in the spring of 2015, Ecumen Detroit Lakes was under major construction that caused significant disruptions to almost every normal day-to-day process.  But employees faced the adversity with determination, and quality of care, customer satisfaction and employee satisfaction all stayed at the highest levels.

Ecumen Detroit Lakes maintained its CMS 5-Star quality rating. Fully 100% of residents/families rated the nursing home a 4 or 5 on a 5-point scale, and 90% of short-stay residents gave a 4 or 5 rating. Plus out of all of Ecumen’s skilled nursing facilities, Ecumen Detroit Lakes scored the highest on employee satisfaction based on Pinnacle surveys and won Ecumen’s Employee Satisfaction Award last year.

At the February 10, 2016 awards ceremony, LeadingAge Minnesota showed the above video produced to highlight the award.