A Shakespearean Day at Ecumen Lakeshore

Ten Thousand Things Theater Company of Minneapolis traveled to Duluth last week to perform Shakespeare’s “Pericles” for Ecumen Lakeshore residents, who were on the edge of their seats for the entire performance. 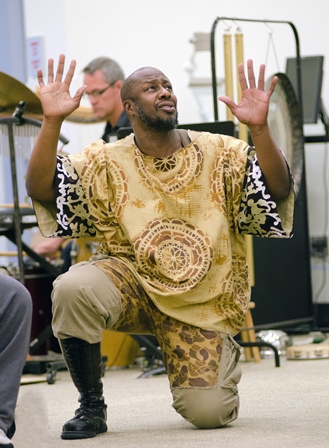 The play was performed in the Lakeshore Chapel, and residents said they felt as if they were in the show because they were so close to the actors. Some even had lines from the show directly spoken to them. One Lakeshore resident mentioned that this was her first experience with Shakespeare, while others said they were long-time Shakespeare fans. “Pericles” is a story of life full of extremes of luck, deep loss, grievous betrayal, impossible challenges and incredible miracles.

Ten Thousand Things brings award-winning, high-quality theater to people with minimal accessibility to the arts, offering free performances at a variety of locations including senior communities, after-school programs, women's shelters and locations in rural Minnesota — any place they can reach people who love the arts.

Following the performance, the Ecumen Philanthropy Team hosted a wine and cheese reception for the audience. Many took the opportunity to discuss the performance and celebrate Ecumen’s partnership with Ten Thousand Things, which was made possible by a Minnesota State Arts Board grant.

This activity is made possible by the voters of Minnesota through a grant from the Minnesota State Arts Board, thanks to a legislative appropriation from the arts and cultural heritage fund.