In Memoriam: Chuck Zimmerman, Who Devoted His Life To Caring for Others 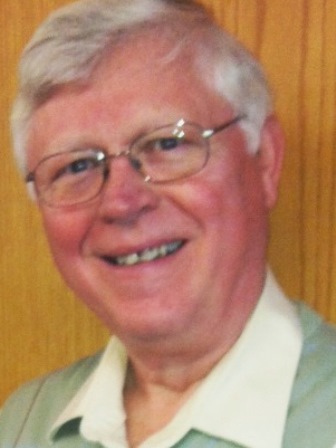 Our thoughts and prayers are with the family of Chuck Zimmerman, who died Monday. Chuck retired from Ecumen a year ago after 35 years of distinguished service as purchasing director, an administrator of three of our campuses, and a regional director. He always had a warm smile and a kind word — and made a huge difference in the lives of seniors.

We honor Chuck for his life of dedicated service.  Below we are reposting a story written shortly before his retirement.

In his 35 years at Ecumen, Chuck Zimmerman has done his part in changing aging, presiding over countless transformations in senior care.  He’s been an administrator at three of Ecumen’s largest campuses, was a regional operations director for 15 years and now runs the purchasing department.

All that experience makes him certain of one thing: there are plenty more changes to come.  “We are evolving right now,” he says.  “The evolution of care is ongoing, and let’s hope that is always the case.” 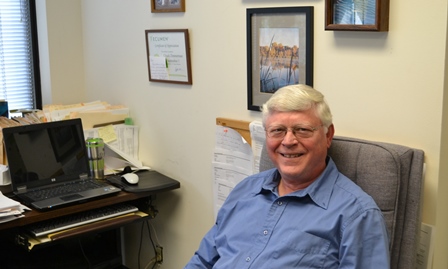 When Chuck looks back, what he sees compels him to look forward and ask:  “I wonder in another 35 years when we look back on where we are today — at our best practices — will we say: how could we have thought that?”

Chuck was there, leading nursing homes through all those changes, helping us know better and do better.  Chuck thinks of his career at Ecumen as “a calling,” but took about ten years from the time he graduated college for the call to come.  He was biology major, so deeply into science that he enrolled in graduate school at the University of Minnesota, studying genetics and microbiology.  Then one of his undergraduate professors ask if he would consider coming back to the University of Minnesota — Morris to fill a temporary teaching assignment.  He did, but temporary became three years.

During that time, he got married, and he and his wife, Dorothy, started supplementing their income by working at a supper club, he as a bartender and she as a waitress.  They both found they loved the hospitality business and aspired to have their own restaurant.

“I had a revelation,” Chuck says.  “I found I liked people more than Petri dishes.”

Pursuing a hospitality career,  he and Dorothy moved to Litchfield where he managed the restaurant and bar at the VFW and she ran the catering business. The nights and weekends became a grind for the young couple thinking about having a family, and Dorothy moved on to a social worker job with Meeker County.

Then one of those life-altering events changed the course of Chuck’s career as well.  You could say his Ecumen career actually started in a bar.

One of Chuck’s regular customers at the VFW, clearly an alcoholic, was rapidly deteriorating and his family asked Chuck to help them with an intervention.  He agreed, then realized he had crossed a line.

“I knew my employers would not approve,” Chuck says. “My job was to serve customers alcohol.  I was having a personal conflict, and I knew I couldn’t do that anymore.  This just wasn’t what I wanted to do with my life.”

There was no big showdown.  He just started searching for a new career and analytically landed on the job of nursing home administrator.  “I had never been in a nursing home,” he recalls.  “This was a purposeful job search to find a role with a long-term future.”

His background in hospitality and education seemed like a good fit, and he went for it, taking the course work he needed to qualify.  As he started doing his internship at what is now Ecumen of Litchfield, he knew for sure this was his calling.  Before he finished his internship, he got a job offer as assistant administrator there, and his career quickly accelerated.  “This is what I was meant to do — a calling of service,” Chuck says.

He left Litchfield to become the administrator at what is now Ecumen Pathstone Living in Mankato and about three years later became the administrator at Ecumen Parmly LifePointes in Chisago City for the next six years.  The next job was an interim administrator assignment working on a special project, and then he was promoted to an Ecumen regional director job that he held for the next 15 years.  Seven years ago, he started the Ecumen Purchasing Department.  “I could not have found a more fulfilling career with an organization,” he says.

Although Chuck has some big-deal administrative accomplishments he is proud of, he prefers to talk about the things he has done  — that still tug at his heart — that he knows directly touched people’s lives.  They are things that have honored and empowered residents and staff.

While he was the administrator in Mankato, he went to bat for a cat named Mitzi, who became the first officially sanctioned therapy pet in a Minnesota nursing home.  Mitzi, a stray gray tabby, showed up one day, hungry and malnourished.  A resident secretly started feeding her with milk from the dining room, and the secret started to spread to other accomplices.

At that time, by state regulation, animals weren’t allowed in nursing homes. But Mitzi was adored, especially after she had a litter of kittens in the front lobby. One resident, who almost never came out of her room, emerged and started caring for the cat and her kittens — once again engaging in life.  As Chuck paints this scene, still vivid in his mind, he becomes emotional.

He was so moved by the effect Mitzi was having on the residents that he went to the Department of Human Services, navigated the bureaucracy, did all the paperwork, and got a waiver so Mitzi could legally live there.  It was one of his first official acts of creating home.

“Mitzi was so smart and brought so much joy to the residents,” Chuck recalls. “She learned where she could and couldn’t go, and she learned to take the elevator, so she could go visit all around the building. Making this possible was one of those early accomplishments in my career that I may be most proud of.”

Also in Mankato, Chuck got the idea of making the hallways friendlier by placing signs on resident’s doors that allowed them to post a picture of themselves. “At that time,” he recalls, “all you had was a metal slot and slide-in a plastic card.”

He commissioned a local sign company to make new templates that would allow staff to use instant cameras to take photos that could be posted along with the resident’s name.  While this type of signage is routine today, it was groundbreaking then.  Chuck doesn’t know if he was the first administrator to do this, but he knows it made a difference.

When he was at Ecumen Parmly LifePointes, he remembers the last days of Isabelle Lindgren: “She was a wonderful lady who was a long term staff member, who started working there at age 16, never married, and worked there more than 40 years and was a volunteer for another 15 years before she became a resident.  As she became more frail, I was looking for a way to honor her and what she meant to that community with her many years of service.”

Chuck had a plaque made and carried it to her bedside right before she died.  With tears in his eyes, he describes a pivotal life moment: “As I sat by her and presented it to her and put it on the wall where she could see it, she said:  ‘I love Parmly.  Parmly is my home.’  Those were her exact words.  Those words basically guided me through my career.  What is our ultimate goal as caregivers?  To create home. For those folks who have to come to our communities to live, it is our responsibility to create a sense of home for them. The ultimate example for me is what Isabelle said to me.  If we could create that feeling in the hearts and minds of every resident we care for — that would be the ultimate goal.  That had a profound impact on me.”

The Isabelle Lindgren Distinguished Service Award is still given annually to a staff member at Ecumen Parmly LifePointes who embodies these values.

Speaking of plaques, Chuck walks over to the wall across from his desk, and takes down a framed poem.  “This was a poem written anonymously that I found at the beginning of my career. For years, I had it on my wall on a piece of paper.  My wife had it done in calligraphy and framed it for me as a Christmas gift.  It has been a fixture in my offices over my career.”  It says:

I slept and I dreamed

That life was all joy.

I woke and saw

That life was but service.

I served and understood

That service was joy.