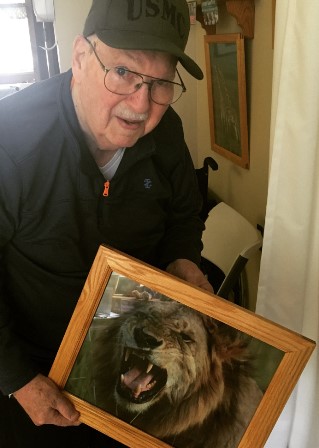 “It’s the only way you can keep accurate memories of your experiences. I don’t go anywhere without my camera,” said Dick.

With a camera by his side, his experiences have taken him near and far as he looks for the perfect picture. While he figures he’s taken thousands and thousands of pictures in his life, one set of photographs has a special place on his wall and in his heart — pictures from an African adventure.

In his room at Pelican Valley Health Center, Dick proudly displays a rotating collection of animal pictures from this trip. “I probably took about 500 pictures. I got at least 40 framed and keep about six to eight in my room here,” he said. “Every few months I change them out with a different batch.”

The current collection on display is an assortment of lions, giraffes and leopards. While the photographs look incredible, once you know the full story behind them, a new appreciation for the work is gained. “I didn’t use a telephoto lens, just a 55mm one,” Dick said. “Some of these pictures I was only about 15 feet away from the wild animal.”

Finding a guide to help find the animals was almost more challenging than taking the pictures. “A lot of guides won’t take you that close to the animals. Most drivers I met wouldn’t do it. But I found one and gave him a little extra money so he agreed to take me,” said Dick. “He was scared to death the whole time. He was sure I’d get clobbered by a lion or something. I had more guts than I had brains, and I wanted to do it.” 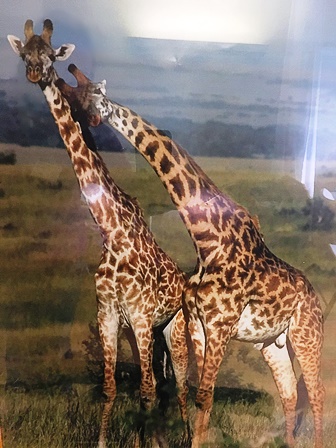 But getting close to the wildlife and capturing the beauty of the animals was just part of the allure and excitement behind taking pictures. “You don’t see many nonprofessional pictures of African animals. They just don’t like to see amateurs getting so close to wild animals, but I was nuts,” he added with a laugh.

Dick has two favorite pictures: one of a pair of giraffes and another of a snarling male lion. Dick says the lion picture was really the only picture he took that he was actually a little bit scared. “I was about 15 feet from the lion. It growled and snarled at me, so I quick took the picture and ran like hell back to the car,” he said.

Unlike today’s photography where you can see right away if you captured the perfect shot, Dick didn’t know how well it’d turn out until the weeklong trip was over and he was able to develop the pictures. But the end result made it worth it. Dick figures he’s spent at least 30 years behind the lens. He likes to photograph just about anything but really enjoys landscapes and animals.

“I’m just a photographic nut. It’s just one of my hobbies,” he said. While he isn’t taking African safaris now or getting just mere feet away from wild animals, Dick enjoys being able to look back on his work and reminiscing about the great stories t