Ecumen and Eagle Iron Partners hosted a ceremonial groundbreaking May 19, 2015, for their new development in the Mill District of Minneapolis, and construction has begun.

Eagle Iron Partners, the master developer, will build a six-story, income-restricted apartment building called Mill City Quarter next to a five-story, market-rate senior apartment complex developed by Ecumen and called Abiitan Mill City. For renderings and detailed information on the projects go to millcityquarter.com and abiitan.org.

The project brings the first affordable housing and the first senior housing complex to Downtown Minneapolis — on one of the last open parcels of land in the Mill District.

“It took five years to put this development together,” said Matt McNeill, Ecumen director of business development. “The site is one of the most vibrant and walkable areas of the city but was not developed due to numerous complexities that had to be resolved.  Working collaboratively with the City of Minneapolis, Hennepin County, the Metropolitan Council and the Minneapolis Parks and Recreation Board, along with Craig Kupritz, who owns the adjacent Mill Place office building, we were able to find ways to put all the pieces in place.”

For the groundbreaking ceremony, there was a gathering of city and county officials and representatives of the numerous companies involved, along with neighborhood residents. 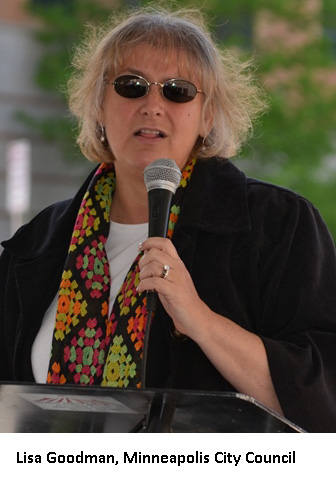 Speaking to the group, McNeill said: “Minneapolis is a vibrant city, and buildings go up all the time.  But the two buildings rising on this spot literally break new ground for two groups of people who want to live the city life but have difficulty finding accommodations. Now seniors and those who need affordable housing will have a special place in the heart of the city and be able to enjoy urban life.”

He said Ecumen is pleased to have its first community in the heart of a city to meet the changing desires of the current generation of baby boomers who are now retiring.

“Many want the option of urban life and a walkable community,” McNeill said.  “And that’s what our Abiitan development is all about — all the comforts of a senior living community integrated into an urban neighborhood with culture, nature and entertainment. Residents will be able to walk to the river, to the Guthrie Theater, Gold Medal Park, the Mill City Farmers Market, the Light Rail and skyway system and the new stadium.  At home they will have numerous amenities, including a fitness center, a restaurant, concierge services— all in a state-of-the-art building with a staff that understands their needs.

McNeill said one of the major commitments that brought the deal together is the agreement to create a collaborative public space between the buildings, like a Dutch woonerf, where cars, bikes, pedestrians and public spaces all coexist.  This space, where a historic rail corridor had divided the property, will become a public access gateway to the Minneapolis Park Department’s riverfront trail system.

The project site for the development currently is a two-block parking lot, bounded by 2nd Street to the south, 3rd Avenue to the west, 5th Avenue to the east and the River West high-rise complex and Mill Place office building to the north.

The Eagle Iron Partners Mill City Quarter project with have 150 units of affordable rental housing in a six-story building, which will also include about 15,000 square feet of destination retail space.  Ecumen’s Abiitan Mill City building will be five stories with 151 rental units specifically for seniors, including options for independent living and memory care.  The building will also include a fitness center and restaurant open to the public. Both projects are scheduled to open in the Fall of 2016. 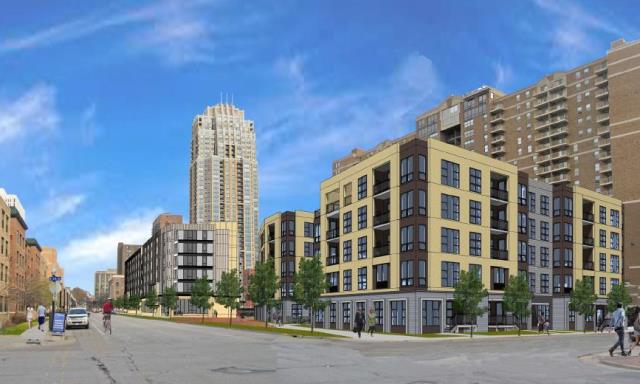