Favorite Blog Post: A Hospice Client Gives His Nurse a Day She Will Never Forget

It was the tractor ride from heaven. It was a life-affirming lesson so touching that Shelly Hank, RN, a nurse at Ecumen Home Care & Hospice-Litchfield, proclaimed it the highlight of her nursing career.

Roger, one of her hospice clients, said to her one day: “Shelly, do me a favor?” 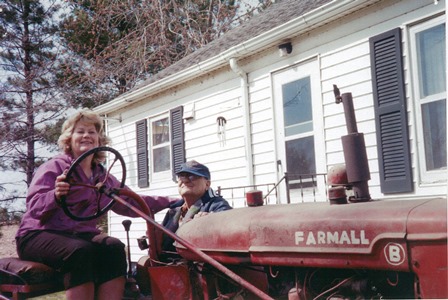 “Anything, Roger,” she replied. “Anything.”

“When I die, leave my glasses on. I want to see the light.”

“It was the sweetest thing I’ve ever heard,” Shelly recalls. “He knew he was turning the corner, and he was ready.”

They talked.  Roger, a farmer, had a last wish — that he could drive his tractor again.

“I would like to go on a tractor ride, too,” Shelly said, doubtful it would happen.

The next time she came for her regular nursing visit, Roger had one of his three tractors sitting in his front yard.

“What are you going to do with it?” Shelly asked.

But Roger was far too weak to get on the tractor. So Shelly and Roger’s wife lifted him up and secured him.

He showed Shelly how to start the tractor. She popped the clutch way too fast. They lunged — and laughed.

“Give me a ride,” Roger insisted, and off they went around the farm in a cloud of pure joy.  Roger’s wife ran beside them, taking pictures.

“I don’t know who was grinning more — me or him,” Shelly recalled. “I was beaming for the next few days. It was amazing. It was his dream.  It was a dream for me too. It was amazing!”

The ride was on Thursday. On Sunday, Roger died.

At the funeral home, Roger’s wife had the pictures of Roger’s last tractor ride proudly on display.

“I’m sure he died with a smile on his face,” Shelly said.

Sandy Dougherty, the Clinical Director at Ecumen Home Care & Hospice-Litchfield, summed up the significance of this bigger-than-life tractor ride: “We get asked all the time how we do what we do and how we can deal with death day after day. This explains how and why.  Our clients are living the time they have left in the best way possible, and we’re helping them.  What better job could you ask for?”

Plus, it’s not just a job.  It’s a calling — putting smiles on the faces of people who know they are dying.

“I’m a Litchfield girl, born and raised here,” Shelly says.  “I walk around Litchfield and see all these people my dad’s age who will be leaving us soon.  I know these people.  I want to help however I can, and I am passionate about it.  I try to do whatever I can.”