You will find nothing in Ecumen’s mission statement about coyotes. But Ecumen employees are empowered to make judgment calls — especially compassionate ones.

Last Monday morning in the subzero weather, a frostbitten, emaciated coyote came to Ecumen for help. Several employees put everything aside to save her life. 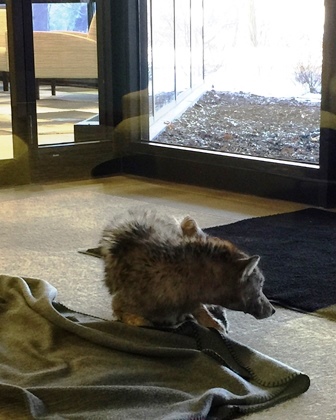 About 8 a.m. the coyote limped into the Ecumen Home Office parking lot in Shoreview. Employees spotted her and went out to investigate.  The shivering coyote started hobbling toward the street, but they were able to coax her back toward the building and into an enclosed vestibule.  Employees Rose Lenzner, Bob Fischer, Linda Willard and Jillian Davis went into action, bringing her water and a blanket — and letting her know they cared.

“It was almost like she knew she would be OK here,” said Jillian. “She was hesitant and scared but she came in anyway. She was whimpering and grunting in pain.”

In agony, the coyote tried to stand by the heat radiator but soon fell to the floor.

A Ramsey County Sheriff’s deputy responded to Ecumen’s call but he said he had never handled a situation like this.  He called his sergeant, who told him Animal Control didn’t open until 10 a.m., but said she would drive to Little Canada to pick up the Animal Control van.  And she called the animal control officer to meet her at the Ecumen Home Office.

Ecumen CEO Kathryn Roberts, a former Director of the Minnesota Zoo, suggested the coyote be taken to the Wildlife Rehabilitation Center in Roseville, just a few miles from Ecumen headquarters. The animal control officer got no resistance as he maneuvered the coyote into a kennel and then into his van.

At the Wildlife Rehabilitation Center, the vet said she was in “dire straits” with a severe case of chronic mange and would surely have died in a few hours without the rescue.  The wildlife center posted pictures on Facebook as they worked to revive her.

Tuesday night, WCCO-TV did a story on the Wildlife Rehabilitation Center that prominently featured the coyote.

The Ecumen rescue team asked the wildlife center if they could do anything more to help.  The center said it would appreciate donations of towels and pet food for the many wild animals it serves.  Today the lobby of the Ecumen Home Office is filling up with employee donations. Concern for the coyote has been the main topic of conversation around the office this week.

The coyote’s prognosis is good. She had no broken bones, and the mange is curable.  She’s starting to eat now and showing fear of humans — a very good sign she will be able to go back into the wild.

Ecumen’s actual mission is to “create home for older adults.”  But, as Jillian observed, on that cold January morning “creating home” took on a whole new meaning.  It saved a life.