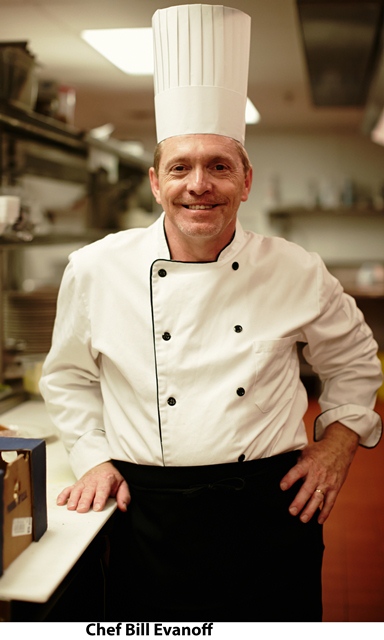 Chef Bill will be working with Chef Thomas Boemer, the celebrity chef representing the Twin Cities at the popular charity event that pairs chefs and players from the 32 NFL cities with great food and fine wine to raise money for hunger-related charities in each city.  Along with a night of food tasting, 2,500 attendees will bid on auction items and hobnob with NFL legends while listening to live music by top bands.

Bill was picked for the high-profile and high-pressure assignment by Wayne Kostroski, a famed Minneapolis restauranteur who founded the charity event 25 years ago when the 1992 Super Bowl was held in Minneapolis. Since the event started, it has raised more than $24 million for hunger relief.

Several years ago, Bill made a switch in his career from working in prominent Twin Cities restaurants to working in senior living as the dining director at Ecumen Seasons of Maplewood.  Along the way, Bill had worked with Kostroski, who owned Goodfellows and Tejas.

Bill says he was picked for the Super Bowl charity event mainly because of his operational knowledge of how kitchens run.  He will be helping construct two industrial kitchens at the Cow Palace that all the chefs will use.  When that job is done, he will also do cooking with Chef Boemer.  And after the event is over, he will be in charge of food reclamation — making sure the leftovers get to area food shelves.

He’s done this once before at the Super Bowl in 2008, when the New York Giants played the New England Patriots in Phoenix.

Bill will be rubbing elbows with some of the top chefs in the nation and expects to “raise some eyebrows” as a senior living chef.  But Bill says he will be wearing his Ecumen whites proudly.

“I’m on a quest to change the mindset about senior dining,” Bill says. “I want to squash the stereotypes.”

That’s what Bill does every day at Ecumen Seasons at Maplewood, where his goal is to make every meal a restaurant experience for residents. Everything is prepared from scratch to order, and Bill even honors special requests not on the menu.

Bill has over 30 years of kitchen experience.  Before moving into the senior living sector, he worked at well-known restaurants such as Tejas, Bar Abilene and the Blue Horse. He has also catered some high profile political campaign events for Walter Mondale, Hillary Clinton and Barack Obama.

For more about Chef Bill and his work at Seasons at Maplewood, go to this Changing Aging blog post.