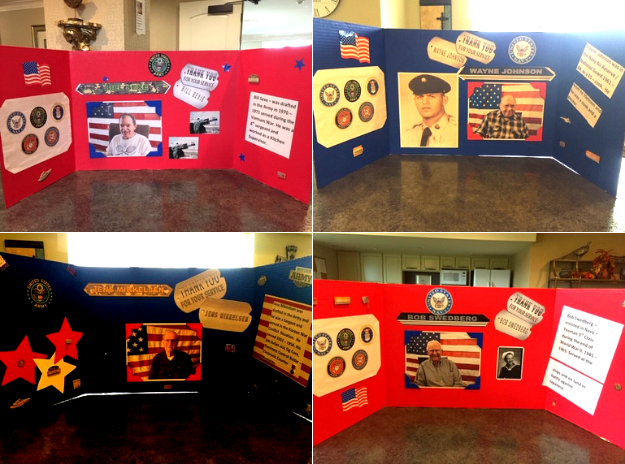 For every veteran who moves in at Prairie Hill, Janet creates a tribute board. To celebrate Veteran's Day, she displays all of the boards in the dining room and has a special breakfast open to the community with speakers, music and a presentation.

When a veteran passes away, Janet displays the board for the memorial service she conducts at Prairie Hill, complete with taps. Then she gives the family the board to keep as a memento, and they usually display it at the resident's funeral.

The boards have a photo of the resident with the American Flag as the back drop.  Around that photo are photos of the residents from their service days.  She also adds clip art of dog tags and the logo of the branch of the service they served, as well as facts of their service, such as what war or what their specialty was.

Lisa Hofferbert, Executive Director at Ecumen Prairie Hill, said she recently attended the wake of a resident and noticed that the photo next to his urn was a photo of him at Prairie Hill holding his Veterans board.

“I always knew how meaningful the boards were at the Veterans Day events,” Lisa said, “but seeing the board as the focal point at a funeral really showed me how meaningful they are to the families.  This is the not the first time I have seen one of Janet’s boards at a funeral.  I feel like she truly honors the residents and their service though this wonderful piece.”

Thank you, Janet, for honoring our veterans in such a meaningful way.