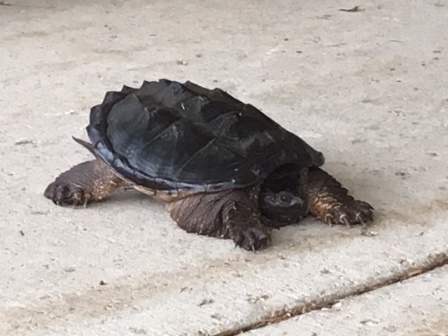 After several inches of torrential rain in Mankato this week, a solitary turtle appeared out of context on the grounds of Ecumen Pathstone Living, which sits on the banks of the Minnesota River.

A concerned member of the activity staff called animal control, which politely said rescuing turtles is not part of its mission.  So the staffer called Jim Gatchell, Pathstone’s Director of Environmental Services, who was happy to take the case.  But when he went to get the turtle, it was gone.

Friday morning as Campus Director Shelly Cornish was coming to work, she spotted the turtle outside the entrance to Pathstone’s Assisted Living community.  Soon residents started pouring out to get a closer look. 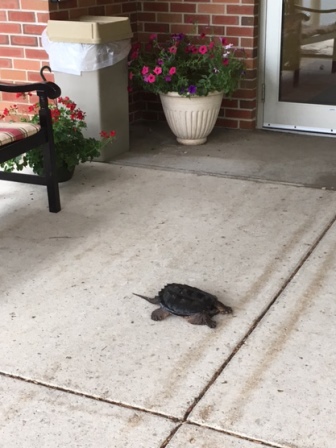 “It was really cool,” Shelly said. “Residents started telling so many stories from their childhoods — about things like catching turtles and having turtle soup.”

Before anyone could fully re-live childhood, Jim rescued the turtle and returned it to the river.

Good feelings were had by all. The turtle gets a chance to live happily ever after.  And the residents have yet another sweet turtle memory.

Like animal rescue stories?  Check out this story from earlier this year about a coyote rescue and the later story about a happy ending.