Ecumen Meadows Gets a New Spa

Thanks to a generous donation, residents of Ecumen Meadows in Worthington, Minn., are enjoying a new spa — complete with a walk-in whirlpool tub.

John Elsing of Minneapolis donated $10,000 to create the “Water Meadow Spa” in honor of his mother, Mary, who was a resident here before she died in 2011 at age 100.  Elsing is a Dutch name that means “water meadow.” 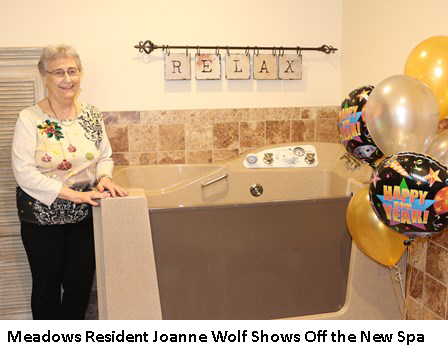 The Elsing family had a farm near Worthington.  Mary was married to Herman for more than 75 years, and they had two children — John and Marie.  John recently wrote a book chronicling the family history called Keeping Time: 70 Little Stories, which is available on Amazon.com.

John wrote and designed the spa dedication plaque, which offers tribute to his mother’s work as a schoolteacher and her focus on “the farm and its garden, her family and friends, her granddaughters and great granddaughter.”

Prior to John’s donation, Debbie Cervenka, an Ecumen trustee who heads up the board Philanthropy Committee, had issued a pledge to donate $10,000 to Ecumen Meadows— if the community matched it with other donations. In short order, $10,000 became $20,000.

“We’re so grateful,” said Nancy Garvin, Ecumen Meadows Housing Director. “We didn’t have anything like the spa. The walk-in tub is a wonderful feature for residents who have difficulty getting in and out of regular tubs. This is such a wonderful enhancement to our community.”

In 2014, John Elsing also made a $100,000 donation to Ecumen Lakeshore in Duluth to create the Elsing Chapel.