In 1974 Debra Klouse, a newly minted nurse, first walked through the doors of St. Mark’s Living in Austin, Minn.  She remembers how welcoming and friendly everyone was… how it was like being part of a big family.  “I’ll try this for a little while,” she remembers thinking, “and a little while turned out being 40 years.”

“I guess I just found my niche,” Debbie says. 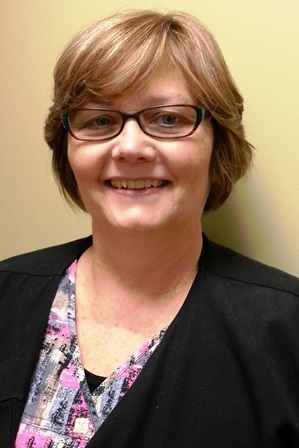 Debbie has worn many hats, seen many changes and reported to many Directors of Nursing.  The constant across all those years is the absolute joy she takes in caring for seniors.

“I just really enjoy working with the elderly,” she says. “My heart goes out to them.  You learn so much, and it’s made me a better person and a wiser person.  I have so much respect for what they’ve seen and what they’ve been through in their lives… the Depression… and wars.  I’m just in awe of them. I enjoy my job.  I really, really do.”

Working over four decades in a relatively small community means that Debbie has cared for many friends, relatives and even former coworkers.  “Some of my coworkers have come here and passed on,” she says.  “That really hits home when we worked so closely together on the floor.”

Debbie says one of the main reasons she has stayed in long-term care nursing is precisely because she gets to know people so well — those she cares for and those she works with.  At St. Mark’s Living, 13 people have tenure of more than 30 years.

It’s been a job that has allowed her to balance the other parts of her life, including helping run the family farm with her husband.  More than 30 of her 40 years have been on the night shift, which she says made it easier to raise a family and juggle schedules.  Debbie and her husband have three grown children.

Debbie says she still continues to learn in her job and has had the opportunity to do several types of nursing over the years. She’s been a charge nurse, a rehabilitation nurse, a wound care nurse and just this year moved into a job in St. Mark’s assisted living unit.

She always knew caregiving was her calling.  As a young girl, Debbie helped her mother take care of her grandparents.  Her mother also was a nurse and a strong role model. “My mother’s model — what she taught me and what I’ve taught my kids — is to treat everyone the way you want to be treated, ” Debbie says. When her mother became ill, Debbie cared for her.

“It’s just been a constant in my life to have the elderly around me all the time,” Debbie says.

Getting to know so many people at the most vulnerable times of their lives also means having to say goodbye.  Debbie says she’s developed an intuition about when someone is ready to pass on.  “I just know,” she says, and that knowledge helps her prepare families.

There have been times, Debbie says, when it’s clear to her that an elderly resident is ready to go but just wants to say goodbye first.  She’s been able to sensitively let the families know what is about to happen and facilitate closure for everyone.

Debbie says a major reward of her job, in addition to getting to know the residents so well, is the feeling of appreciation — deeper than words can express — that flows so genuinely from residents and their families.

“They are so appreciative of all the little things you do,” she says.

“Debbie Klouse is an ideal example of how much impact one employee can have,” says St. Mark’s Human Resources Director Cheryl Corey.  “St. Mark’s has been in existence for over 51 years, and it is truly remarkable that one employee has been with us for 40 of those years. Her dedication, loyalty and service to St. Mark’s are great, and her compassion for our residents is outstanding.  Residents just love her!”