Victoria Amaris, an anthropologist who specializes in cross-cultural communication, recently gave Ecumen employees an overview of the challenges and issues faced by Hispanic and Latino people and discussed common misconceptions she regularly encounters.

The diversity among Hispanics and Latinos is not well understood, she said. “We come in all colors. We are of all races. We are an ethnicity – not a race.”

“The tendency is to make us all the same, but we are really lots of sub-groups,” Victoria said. She said when she is in a Mexican restaurant, people often ask her about the food. “I’m Colombian and our food is very different,” she said. “It’s not hot at all, and we use lots of herbs.  It’s more like French country food.”

In fact, she said, “We don’t always speak the same language. Some words we Colombians use rather casually are obscenities to Mexicans.” 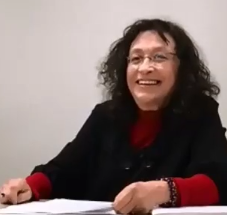 Basic terminology relating to Hispanics and Latinos lacks clarity, Victoria said. People of Latin American descent usually refer to themselves as Latino. The term Hispanic generally refers to people who share Spanish as a common language, and people from Spain tend to prefer being called Hispanic. “But Mexican Americans don’t like to be called Hispanics,” she said, because of the historical tension between Mexico and Spain. Some Mexicans prefer to be called Chicanos, and there was a time when Chicano-Latino was in common usage.

“I really don’t care what people call me,” she joked, “I just prefer not to be hyphenated.”

Throughout her career, Victoria said the theme of her work has been about how we can all work and live together in a multicultural society. “All people bring challenges and gifts to a society,” she said.  During her career Victoria has worked as the Cultural Dynamics Manager at the Greater Twin Cities United Way and as the Research Director of the Minnesota Latino Affairs Council, as well as a consultant on many health-related projects.  She was the first Latina on the Minneapolis YWCA Board in 1989.

“I felt I was a token,” she said. “But I was more than willing to be a token to open the door.”

Responding to a question about how seniors are cared for in the Hispanic-Latino community, she said there are major differences compared to American culture.

“The elderly almost always stay with the family,” she said, rarely ever going into nursing homes, assisted living or hospice.

“Grandmas are treated as a national treasure,” she said. “The value of a woman increases as she ages. Men too, but especially women. Wherever Grandma is, people follow.” By comparison, she said there is a greater tendency for American families to try to make their elderly comfortable but off to the side.

Overall, among Latinos and Hispanics there tends to be less separation of the ages. “Young teenagers hang out with older people. The young and old are closer and have close relationships throughout life that grow and grow,” she said.

She said a friend once asked her, “Is everything in your culture a family affair?”  The answer is “yes.” In general, she said, Hispanics or Latinos need more social interactions and are strongly bound by family values.

She advised caregivers to be aware of this need and also to understand that courtesy and respect tend to be especially important. Also, she said Latino women tend to be modest about situations such as bathing and would not want to be bathed by a male nurse. On the other hand, bedroom doors are seldom closed in Latino households, she said.

To provide culturally competent care, “just ask people how they want to be treated.”

She noted that Hispanics and Latinos often are treated differently in this country based on where they are from. “This is a class issue,” she said. Mexicans who come here tend to be rural, whereas Cubans, Colombians and Nicaraguans tend to be more urban and assimilate better into American culture.

Smiling, she said, “Who is the immigrant becomes the question.”