Diversity and Inclusion Learning Event: An Introduction to Islam and Muslims

Do you know the distinction between Islam and Muslims?  Or why Muslim women wear headscarves? Or how Muslims regard Jesus? 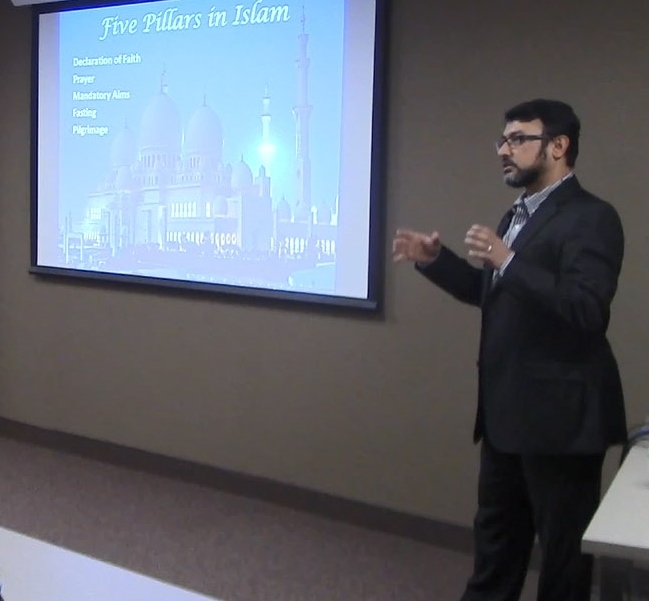 Tamim Saidi, representing the Islamic Resource Group in Minnesota, visited the Ecumen Home Office February 23, in the first of a series of learning events for Ecumen employees designed to increase understanding and knowledge of issues related to diversity and inclusion. This program is sponsored by Ecumen’s Diversity and Inclusion Council, a group of employees chartered to advance Ecumen’s diversity and inclusion goals.

Dr. Saidi, a pharmacist, volunteers his time to help educate others about his religion and also teaches Sunday school.  As a teenager, he fled Afghanistan to Pakistan, then came to Minnesota in 1990, where he attended the University of Minnesota.

Americans often do not understand the basic point that Islam is the religion and Muslims are the practitioners, Saidi said. Plus, there is a common misperception that most Muslims are from the Middle East.

“Not every Arab is a Muslim, and not every Muslim is an Arab,” he said.  In fact, the majority of Muslims are from southern Asia, especially Indonesia, Pakistan, India and Bangladesh. About a fourth of the world’s population is Muslim – about 1.6 billion people.  Islam is the world’s second largest and fastest growing religion.

Estimates of the number of Muslims in the United States range from 3.5 to 7 million, and in Minnesota, from 120,000 to 150,000.  Islam comes from root words that mean peace through submission to God.  Muslim means “the one who submits to God.”

Anticipating that he would be asked about ISIS, Saidi said: “ISIS is to Islam what the KKK is to Christianity. They are both tiny groups who try to justify their evil and violent ideology based on the holy books, but they are rejected by the vast majority of the participants of the religion.”

Not only do most Muslims reject ISIS, he said, but also the extremist group has killed “a thousand times more Muslims than non-Muslims.  “They are so vicious that even Al-Qaeda thinks they’re crazy,” he said.

Saidi cited a saying from the prophet Muhammad: “A Muslim is somebody from whose hand and from whose tongue people are safe.”  In other words, a Muslim is somebody who does not hurt people physically or verbally. Like Christians, Muslims believe in a version of the Golden Rule, he said, often stated as “you are not a believer unless you want for your brothers and sisters what you want for yourself.”

Speaking to about 40 Ecumen employees, Saidi emphasized the distinction between religion and culture. “Christians in different parts of the world look and act very differently,” he said. “The same is true for Muslims.” Islam allows room for different cultures, he said, noting “not everything a Muslim does comes from religion.”  For example, Muslim American culture is very different from Muslim culture in Saudi Arabia.

“Imagine a Christian family in Minnesota, a Christian family in South America, in Africa, in Europe, in Vietnam,” he said. “Even though they all have the same religion, they have very different cultures. They will dress differently, eat different kinds of foods, use different kinds of spices, and design their homes and churches differently.  The same is true for Muslims.  Muslims in Indonesia will have a different culture than Muslims in Afghanistan, where I grew up, than Muslims in Iran or Somalia or Saudi Arabia or in America.”

He added: “A lot of times when I hear things on the news which talk about the Muslim world, most of the time it has nothing to do with the religion. Rather it has to do with politics, culture, superstition, and ethnic and tribal codes of conduct.”

Islam, like Judaism and Christianity, is a monotheistic religion, meaning practitioners believe in one God.  Muslims also believe in the sanctity of the Torah, Psalms, Gospel, the Scrolls of Abraham and especially the Quran – considered the last revelation of God to humanity.  Muslims believe The Quran is the verbatim word of God that came directly to humanity through the archangel Gabriel over a 23 year period.  Muslims also believe in the presence of angels, who are messengers of God, but do not worship them.

Jesus is treated with great love and respect in the Quran, Saidi said, and is considered one of the greatest prophets of God.  But Jesus is not considered divine or the Son of God. Likewise, Muhammad, the greatest Muslim prophet, is not considered divine. “Muslims believe there is only one God, who is infinitely, loving, compassionate and kind and all-knowing, all-seeing, all- hearing,” Saidi said.  “God is beyond our imagination, so there are no figures or statues depicting God. Also God is genderless, neither a man nor a woman.”

Like Christians, Muslims believe in a Day of Judgment and Heaven and Hell.

Islam requires Muslims to pray five times a day in a prescribed way, facing toward the holy city of Mecca in Saudi Arabia, where the religion originated in the 7th century.  Saidi joked that if you don’t know which direction to pray based on your geographic location, “now there’s an app for that.”  A mosque is a place where Muslims worship.

Many Muslim women wear headscarves, called hijab, for religious reasons, he explained, because they believe that God has instructed women to wear it as a means of fulfilling His commandment to dress modestly.  Also the hijab is a symbol of faith and identification as a Muslim.  Generally, Muslim women wear headscarves only in the presence of men of other religions, not when they are home with their families.

Some other tenets of the religion include:

In Islam, Ramadan is a month of strict fasting each year from sunrise to sunset to commemorate the first revelation of the Quran to Muhammad. The time of the observance changes each year based on the lunar Islamic calendar. “Ramadan is a time of fasting to attain piety, build will power, feel compassion and reflect on oneself,” Saidi said.

Saidi’s presentation, which you can view below, was the first of three events scheduled so far this year and more will be planned throughout the year.  The sessions will be recorded for later viewing by Ecumen employees.

Ecumen believes diversity and inclusion are essential to living our values, achieving our business goals, providing the best service to our customers, the best workplace for our employees, and building a stronger Ecumen.