Ecumen leaders and communities with outstanding achievements in 2015 were recognized at an awards presentation ceremony at the company’s annual Leadership Meeting held on May 17, 2016, in Saint Cloud, Minn.

About 270 Ecumen leaders gathered for a two-day program that included a full day of training by Ritz Carlton on creating a culture of excellence in customer service. 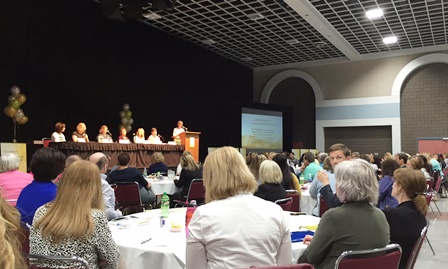 Shelley Kendrick, Ecumen Senior Vice President and Chief Operating Officer, was master of ceremonies for the awards program. “The intent of all the awards is to recognize you for the dedication you and your teams have to our mission, vision and values,” she said.  “My hope is that you will take your awards back to your communities and celebrate with your teams.  Display your awards in prominent places and be proud of what you’ve accomplished.”

Roberts also presented The Ecumen Way Award, a new award this year that recognizes and celebrates an individual leader’s commitment and influence in promoting and building the Ecumen brand.

The Ecumen Way Award was presented to Carolyn Perron, Vice President of Organizational Development.  “You have not only helped define the Ecumen brand but also you have met with nearly every employee throughout Ecumen, unveiling to them the values that support our internal brand — The Ecumen Way,” Roberts told Perron.  “You have also invited Ecumen employees into the process of discovering their own personal values and brand – and connecting their brand to Ecumen’s.  You have also played a key role in the development and enterprise-wide roll out of a number of leadership programs and training programs that illuminate and enhance our brand.”

As she read a list of programs developed and implemented by Perron, Roberts asked audience members to stand if they had participated in the programs. When she finished reading the list, the entire room was standing and gave Perron an ovation.

The customer and employee satisfaction awards were based on rankings tabulated by Pinnacle Quality Insight – a research company that regularly and anonymously surveys Ecumen residents, families and employees for feedback. Ratings are based on a scale of zero-to-five, with five being the best possible score.

The Ecumen Awakenings Team was recognized for its work helping 27 Ecumen communities complete the eight-phase Awakenings certification process.  “This team has worked tirelessly this past year helping many of you integrate Awakenings into your communities as a way of improving the quality of life for people with dementia,” Kendrick said, honoring Awakenings Project Director Maria Reyes, Quality Improvement Nurse Sonya DeSmith, Regional Memory Care Manager Janelle Meyers, and Senior Director of Quality Improvement and Resource Utilization Shelley Matthes.