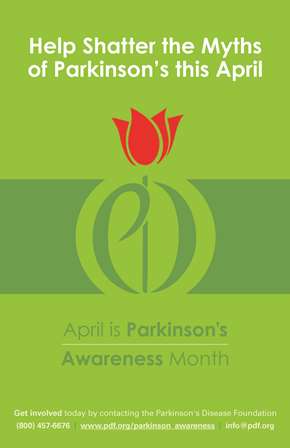 April is Parkinson’s Awareness Month.  The Parkinson’s Disease Foundation website offers a multitude of ideas on how you can help raise awareness and gives extensive background on the disease and the efforts to find a cure.

About one million Americans and seven to 10 million people worldwide live with Parkinson's disease. That is more than the combined number of people diagnosed with multiple sclerosis, muscular dystrophy and Lou Gehrig's disease.

Approximately 60,000 Americans are diagnosed with Parkinson's disease each year and many cases go undetected.  The incidence of Parkinson’s increases with age, and men are one and a half times more likely to have Parkinson's than women.

Parkinson's disease (PD) is a chronic and progressive movement disorder, meaning that symptoms continue and worsen over time. The cause is unknown, and although there is presently no cure, there are treatment options such as medication and surgery to manage its symptoms.

Primary symptoms of Parkinson’s disease include tremor of the hands, arms, legs, jaw and face, slowness of movement, rigidity of the arms and legs and impaired balance and coordination.