With each new year come fresh discoveries and trends for the latest superfoods.

In an article for AARP, Shelley Emling writes, “step aside, kale” and lists the three new hot superfoods for 2017:

1.     Mushrooms: “Researchers say that certain compounds found in the humble fungi may ward off dementia and Alzheimer’s disease by boosting the production of a chemical called nerve growth factor, or NGF, and also by protecting against inflammation.” 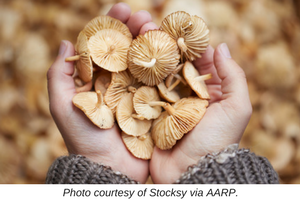 2.     Watermelon seeds: “Not only are they rich in magnesium, vitamin B and good fats, but only a small handful of watermelon seeds packs 10 grams of protein. There is a catch though: To reap the biggest health reward, the seeds need to be sprouted, shelled and dried rather than eaten straight from the fruit. Generally speaking, sprouted seeds often boast more nutrients than their non-sprouted counterparts.”

3.     Black currant supplements: “Like the beetroot, black currants are rich in nitric oxide content and are being held up for their positive impact on muscle recovery and fat-burning. What's more, some studies have shown that black currants could slow down the aging process — thanks to their antioxidants — as well as help prevent diabetes.”